Phoenixabc has taken on a new apprentice – just as another has been given a full-time job as the firm continues to grow.

We have welcomed Andy Colquhoun onboard as an electrical engineering apprentice.  The 22-year-old was delighted when he was told he had been successful by directors at the firm a few weeks ago.

His appointment comes just as electrical engineering apprentice Liam Clement has been given a permanent position at the company.

Phoenixabc Technical Director Richard Mitchinson said he: “We strongly believe that bringing in apprentices and training them will help our future proof our business.

“We find we have very committed people when we take on an apprentice, because they want to learn and want to talk about new ideas. Liam has shown he is keen to listen and learn from our experienced members of staff, and is keen to work in different stages of the assembly of our line cleaning systems. 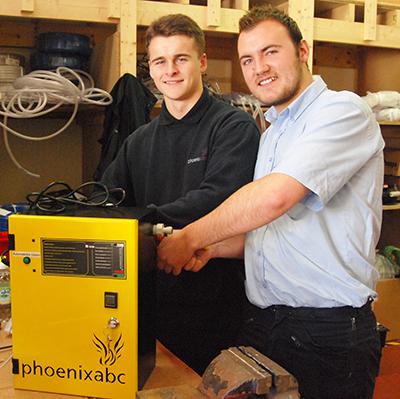 “Andy is now showing the same commitment and we are delighted he is on board. It’s absolutely vital that we employ people who share our vision, as the business grows from strength to strength.”

Andy, who was completing a pre-apprentice programme at Sunderland Engineering Training Association (SETA) when he was offered the apprenticeship with Phoenixabc, said working for an SME was a great benefit to gaining experience.

“I was with SETA for six months before becoming an apprentice at Phoenixabc. Richard saw my CV and asked to interview me. It was fantastic,” Andy said.

“I was over the moon when I found out that I’d been offered my apprenticeship here. It’s great working in a small business because you learn a lot in a great environment. You quickly feel part of a team, and that really helps.

“I’ve already learned a lot in areas that would have taken longer in a large firm, and I’ve already achieved my PAT testing as well.”

And Andy has already seen that his route to apprenticeship can reap rewards, thanks to colleague Liam. The 21-year-old, from Washington, has been with Phoenixabc for just over two years – and is celebrating after he was told he was being offered a permanent position as an electrical engineer.

He said: “I came here the same way as Andy, and I’ve enjoyed my apprenticeship here. Being in a small business means you’re not just a number and Richard has helped me get an understanding of electrical engineering as he has passed on his years of experience directly to me.

“I think you get a lot more support in a small business, and I’m now really looking forward to working as a full-time employee as the company begins to grow with new orders from abroad and at home.”

Earlier this year, Phoenixabc started to export its cleaning system to bars in Poland after a major brewer confirmed orders. And trials of the system have now started in the Czech Republic.